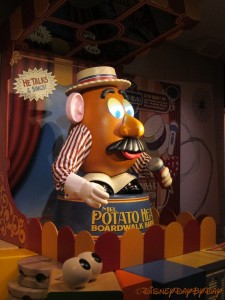 Yes, I know you have spent a long time in this line so you have been able to study every little bit of it.   Welcome to Andy’s room and Toy Story Midway Mania.    As you make your way past all of Andy’s toys and into Andy’s room for the ride, you can’t help but notice Mr. Potato Head.   No, you don’t need your 3-D glasses yet, he is the 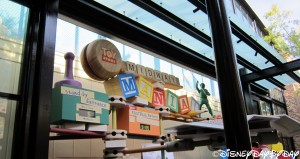 First Animatronic to be able to remove and replace one of its body parts.   He also has a very realistic mouth and eyes that can look directly at the person he is talking to.  Mr. Potato Head is definitely a ton of fun and makes standing in line a little more bearable.

Opening of The Legend of Captain Jack Sparrow

On Dec 6th a new Pirate attraction opens at Disney’s Hollywood Studios.   The Legend of Captain Jack Sparrow.   This attraction is a walk through where guests will experience what it would be like to walk in the footsteps of Captain Jack.   Are you ready to be a pirate??   Below is the video of the Imagineers discussion on the ride and be sure to head over to Disney Parks Blog for more information. 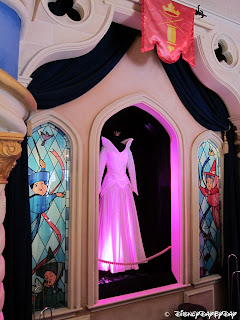 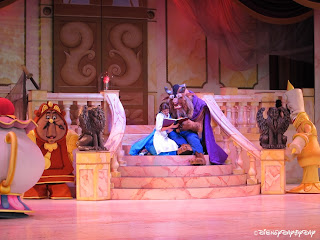 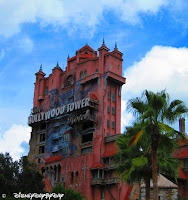 As you enter Hollywood Studios, you’ll be treated to the
typical innocent and fun theme park music, but there…in the background…you’ll
hear something else…almost sounds like screaming, people in fear for their
lives, people falling from the sky.  Hmmm,
maybe we shouldn’t even travel down Sunset Boulevard.  How can such an iconic street name end in fear?  Well that’s just what we will find out.

Muster your courage if you dare and head to the end of the
street. That’s when you’ll see it… a 199 feet tall tower.  In fact, this attraction is the second tallest
attraction at the Walt Disney World Resort. What’s first, you may ask?   Stay
tuned and you just may find out.   Why
199 feet?  I mean come on, 200 feet would
probably have made for easier measurements. Well, FAA regulations require any
building at 200 feet or higher to have a red light beacon on top and how scary would
a tower of terror be with a blinking light on top of it?

When you step into the queue willingly, or not, be sure to
take some time and look around. This is one of the most interesting queues on
property. You will walk through the gardens of the hotel, in their decaying
state. Background music plays melodies from the past launching you into the 1930’s/40’s
era of the hotel.

Onto the ride, you board an elevator with 20 other people and
choose your seat.  As the elevator doors
close you ascend quickly and the doors to the elevator open where you’re treated to a ghostly encounter.  Just
when you think it’s safe, the lights go out and the real fun begins!  You’ll be pulled up and down through a variety
of drop sequences.   Just when you think
it’s over you will rise and fall again.   The Imagineers who designed the ride had
cables attached to the bottom of the elevator and it’s actually pulled down at
a speed slightly faster than free-fall.  In
other words, as you fall you lift from your seat slightly.  The motors used can generate torque equal to
that of 275 Corvette engines and reach their top speed in 1.5 seconds. Yes,
that’s fast and yes that’s fun.

Be sure to take a look at your picture as you exit the ride
as this is proof that you were there and you have survived a great ride at Walt
Disney World.  Now you have permission to
yell at your kids or friends who forced you on the ride and get in line to do
it again.


Rating Comment:   Our seven year old son who will go on
anything is slightly afraid of this one.
And if you do have any type of motion sickness the up and down motion of
this ride will affect your experience.

And as promised, the tallest attraction at WDW is now Expedition Everest
at 199.5 ft.  We will make this our next DisneyDayByDay Rate A Ride post.
Next Entries »