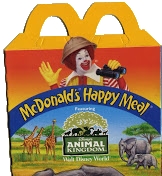 Many of you probably remember being able to get your McDonalds fix within Disney Parks.   Even as recent as the construction of Animal Kingdom where  McDonalds sponsored Dinoland including the Dinosaur attraction and Restaurantosaurus. Where I could get my happy meal.   Today you will still find McDonalds on Walt Disney World Property, but where did relationship come from, how did they get into the parks, and where did they go? Hmmmm

The relationship between Disney and McDonalds goes all the way back to when Walt Disney met Ray Kroc (McDonalds Founder) during World War 1 where they were both part of the Red Cross.   Ray Kroc wrote about Walt in his autobiography, “He was regarded as a strange duck, because whenever we had time off and went out on the town to chase girls, he stayed in the camp drawing pictures.”

In 1954, Walt received a letter from Ray Kroc which stated “Dear Walt,  I feel somewhat presumptuous addressing you in this way yet I feel sure you would not want me to address you any other way. My name is Ray A. Kroc….I look over the Company A picture we had taken at Sound Beach, Conn., many times and recall a lot of pleasant memories…I have very recently taken over the national franchise of the McDonald’s system. I would like to inquire if there may be an opportunity for a McDonald’s in your Disneyland Development.”

Walt forwarded the letter onto the Vice President in charge of concessions at the parks, but Kroc never received a response from the VP.   However decades later McDonalds found its way into the parks and into our stomachs.   All was well until the 1980’s, disagreements between Disney and McDonalds began around the quality of the promotional offerings that McDonalds was creating.   Burger King and other fast food companies jumped at the chance to get involved with Disney.   In 1996, McDonalds was able to negotiate an exclusive deal once again to the tune of $100 million dollars for 10 years.   This agreement supposedly netted McDonalds over $1 billion dollars, just a tad bit more than what they paid Disney.

When 2006 rolled around and the contract was up for renewal, using the numbers from above, you can guess why Disney decided not to renew this contract.   Many speculated that the reason was because Disney was moving in a healthier direction.   Both companies ended up releasing statements that it was a mutual decision to end the contract.    With the ending of the contract Disney converted many of the locations. Even though it’s not the same as a Happy Meal toy, you do get a beach bucket and shovel with your kids meal at Restaurantosaurus.