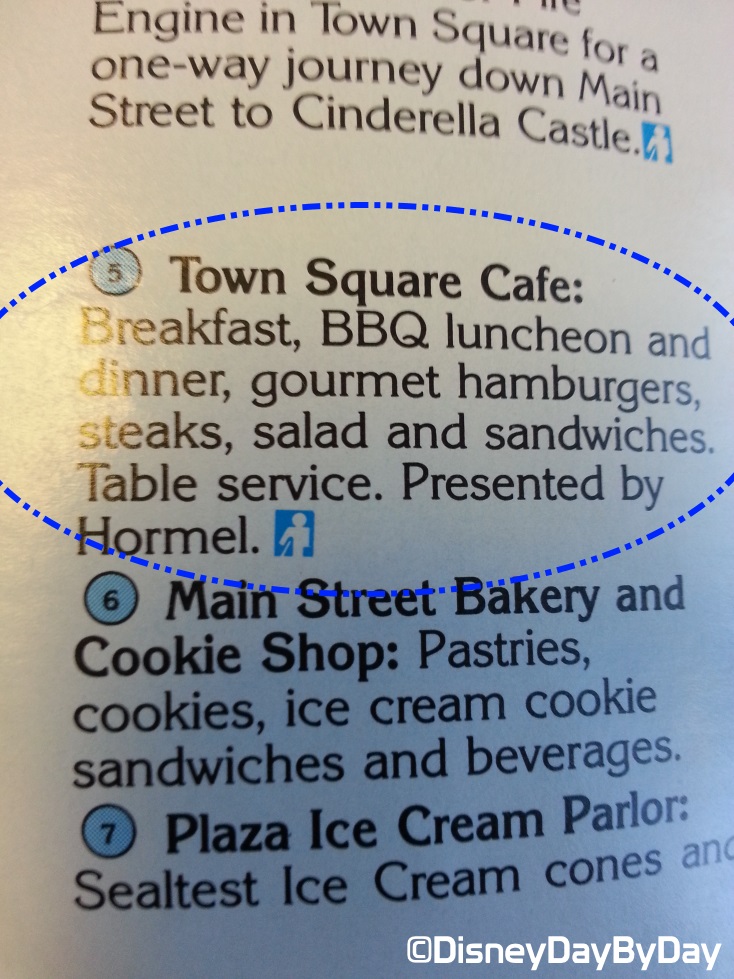 On one of our recent trips we enjoyed a meal at Tony’s Town Square Restaurant and while looking at some old Magic Kingdom maps I noticed that this was not called Tony’s in the 80’s.   Here is a bit of history on what the Tony’s location used to be.

The original plans for the Magic Kingdom called for the location to be a coffee company sponsored restaurant and was to be called the Coffee Mill Restaurant.   The coffee sponsor didn’t pan out, the name changed to Town Square Café and Oscar Mayer stepped in to sponsor the restaurant from 1971 to 1981.   Yes, you could find hot dogs on the menu, but the main attraction was the Monte Cristo.   You also found both Pepsi and Coca-Cola on tap and kids were given the iconic wiener whistle.   Yep, just what you wanted to hear through your meal, a melody of whistles.

Oscar Mayer ended their sponsorship in 1981 and Hormel was added.   The name did not change and the menu changed slightly to include BBQ, hamburgers, and steaks.    The menu also features a history of the Hormel company along with advertisements for other businesses that could be found on Main Street USA.

In 1989 Hormel ended their sponsorship and the Disney Company took over the location going through an extensive renovation to convert it to Tony’s Town Square Restaurant.   The restaurant was sponsored by Contadina in the 90’s and is currently sponsored by Buitoni.

Have you enjoyed a meal at Tony’s?