On our recent trip home for the Holiday’s, my parents gave me the bag below filled with a bunch of our old Disney trip documentation.   The bag was a gift when they purchased the Magic Kingdom Club Gold Card.   Were you ever a member? 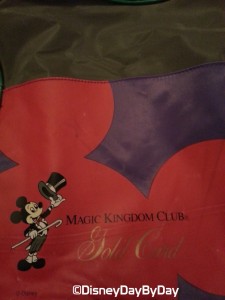 The Magic Kingdom Club was created in 1957 as a marketing vehicle to get more people into the parks.   The club offered discounts and special ticket pricing to employees of large companies.   The card was handed out as a perk to many employees.   With the opening of Disney World, the club expanded to Florida and grew to over 6 million card holders and 30,000 companies.

In the 1980’s the Magic Kingdom Club Gold Card was created for those that didn’t work for a participating company where membership could be obtained for a fee.   The Magic Kingdom Club changed names in 2000 and became the Disney Club which was no longer a free club and required all members to pay a membership fee.    The Disney Club only lasted a couple years before it was also shut down.    Do you miss the club?   Would you feel more connected to Disney if you were a member of a club, or is your magic band enough?